One of the big policies the NZ Labour Party took into the 2017 election was to start reintroducing free education. Labour in the UK took a similar policy into their 2017 election, which is thought to have contributed to the “youth quake” which saw young voters turn out and vote for Labour in that election.

In both cases this represented a significant policy U-turn for both Labour Party’s. In New Zealand user pays education really began when Labour Party Education Minister Phil Goff significantly increased fees 1990. The next National Government in 1992 increased the student loan scheme, which charged interest on money students borrowed even while they were studying. In the UK user pays tertiary education was introduced by the Blair Labour government.

In 2003 Labour had just begun its 2nd term in office. In its first term from 1999 to 2002 Labour had promised to cut the cost to students of tertiary education, and subsequently froze fees at their 1999 rate. In 2002 the promise was watered down to “keep education affordable.” What this really meant was, “allow institutions to increase fees by 5% a year.”

Just as the anti war protests were starting to tail off, the government budget announced the fee Maxima scheme allowing institutions to increase fees within the Maxima. This would be our next campaign on campus.

In September 2003 the Victoria University Council attempted to hold a meeting to increase fees. The University Council decided to meet at 8am on a Friday morning thinking no student would be awake on time…wrong! The Education Action Group  I was responsible for as the VUWSA Campaigns Officer managed to successfully disrupted this meeting. Students’ Association hired a marquee and encouraged students to stay overnight (using the slogan ‘if that’s what it takes we’ll stay all night’). The university council tried to meet, but had to cancel due to the noise from students.

A fortnight later the university attempted to reconvene, this time on a Thursday afternoon and again were unable to proceed. However they moved to another private room and passed the fee increases. As a result a number of us occupied the University Council chamber over night. The next day were decided to leave and regroup. At 3pm the next afternoon, a much bigger crowd of students returned to the Hunter Council Chamber having heard that fees had increased. The response from the University was to call in the police – who sent a number of vans and about 50 officers to remove us. The Vice Chancellor, Stuart McCutcheon who had been targeted by our campaign with charts of ‘sack McCutcheon’ came in surrounded by a number of cops telling us we had 15 minutes to leave, which after some deliberation we did. 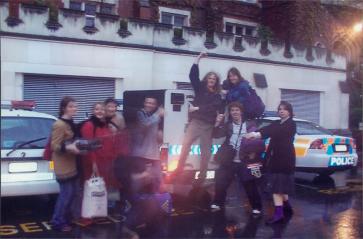 After being kicked out of the Hunter Building – having occupied 3 times in 24 hours. 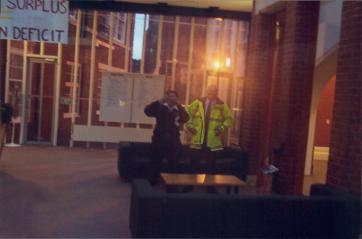 Half the Wellington Police force turn up to kick protesting students out of the University registry office, October 2003

10 minutes after leaving a large order of Hell’s Pizza arrived, intended to feed the crowd of occupying students. A number of us ate nothing but pizza for the next week.

The following week was full of protests and actions on campus. The same week Massey also had fee setting resulting in similar protests. At Vic we famously burnt an effigy of the Vice Chancellor, using my fathers 1970s brown suit.

The following year, 2004, fee setting protests happened again. The University were far more prepared and had the Hunter Council chamber pretty well locked down prior to the meeting. A year later in 2005 they held the meeting out at a satellite campus out of term time. Despite this we still managed to muster a decent crowd both years. Further the issue of fee increases and student debt remained on the political agenda.

We were able to win a few victories during these years. In 2004 The Massey University Council in Palmerston North voted not to increase student fees, a move described by Education Minister Trevor Mallard as “a bad management decision” (quote from the September 2005 NZUSA Conference at Christchurch College of Education). This no increase result came from a strong campaign to by students in the city, getting support of the local council and community leaders. The following year the government replaced Council members who had voted against the increase, with members who would and did in subsequent years. 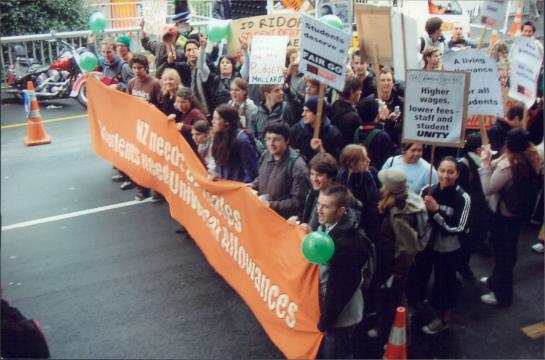 In the 2005 election opinion polls were very close. Labour really needed to pull one out of the hat to win a third term. In May 2005 a thousand strong protest march was led by Student President Jeremy Greenbrook supported by myself and others demanding the government invest in tertiary education. A few weeks later the government were to respond, announcing in their 2005 manifesto that there would be no interest on student loans not only while students were studying (which had been introduced by Labour in 1999) but for all graduates living in New Zealand. The student and graduate vote probably was one key factor in Labour being elected for a third term.

The strange thing about a win is that it can then be hard to get people energised to keep pushing. In 2006, the year I was Student President at Victoria University, and in the 2-3 years following  fee protests smaller and far less vocal. We still continued to make the case for free education as this 2006 feature column demonstrates. And the new VUW Vice Chancellor Pat Walsh didn’t fundamentally disagree. In both 2005 and 2006 Victoria University along with a number of others applied to the Tertiary Education Commission to get an exemption from the 5% fee maxima and wanted increases of up to 10%. These applications were declined.

In Labour’s final term it began increasing eligibility to student allowances. However this would be short lived once the global financial crisis hit and then there was a change of government. National had been clear from the outset that tertiary education was not a priority for funding. True to their word, they invested very little in the sector over the next 9 years. Further they introduced a number of other damaging policies such as removing elected staff and student reps, and introducing Voluntary Student Membership (VSM) in an attempt to weakening the student movement.

In 2016 Labour announced it would introduce 3 years free tertiary study. As often happened in Labour’s 9 years in opposition from 2008 to 2017, they announced a detailed policy which few people read. The initial media announcement was ok, but the follow through was quite poor. It seemed like this was a fairly decent policy that would never be implemented. However 18 months later, during the election campaign Labour surprised everyone by getting its house in order. New leader, new campaign materials, and amongst other things a clear commitment to free education. And much to many people’s surprise, they won.

User pays was never a good idea. The argument about tertiary education being a private good is pretty unconvincing when there are shortages of a number of qualified graduates. The argument that graduates are paid higher so can pay back the loans may have once been true, but now graduate pay rates are often barely above the living wage. Further Student debt ballooned from 3 billion in 1999 to around 10 billion in 2006 while I was VUWSA President, and kept growing after that. Further, in the economy we are moving into, having a well educated population is essential. Removing barriers to this like crippling student debt is essential.