I was elected Victoria University of Wellington Students’ Association (VUWSA) President at the end of 2005. This was two days before the New Zealand General Election where the 5th Labour Government were elected for the third and final time. Students had played an important role in this election, with Labour promising interest free students loans which in a close election helped them across the line. Student fees were still going up each year, and student debt was nearing $10 Billion NZ. The promise was a start, but fundamentally user pays were still in place.

Coming in as a student president the year after a general election, and after a modest win, it was always going to be a challenge. My attention as student leader quickly turned to internal matters both within the University, and within the students’ association.

A major win was resolving a 40+ year ownership dispute of the student union building. From this VUWSA became a central player in the university redevelopment where over the following half a decade the campus hub was significantly developed and improved.

I sat on the University Council, the governance board of Victoria University as one of the two student representatives. My earlier interactions with the University Council had mostly been when disrupting fee setting meetings or other similarly heated situations. Despite the many misgivings of the University Council members, I soon established a positive and constructive relationship with all members of the Council. As a result we were able to advance a number of issues affecting students ranging from academic issues through to student welfare.

The biggest challenge I faced however was internally. The executive were quite young and generally inexperienced, even by student association standards. Further the internal issues of the association really came to the fore that year. The Student Association levy had remained at the same level for nearly 2 decades. In that time Victoria University had expanded from 1 campus to 4. Further the Students’ Association had increased the welfare and advocacy services it provided to students, as user pays had meant there was greater need than in the past.

In addition to this the students’ associations budget setting process was inadequate. A zero budget system had been established a few years earlier, whereby elected representatives would built the whole budget from scratch each year. Nice idea, but when 2/3 of the cost were fixed and when the exec turnover was high this meant budgets often weren’t set in a timely manner meaning control of spending was a challenge. 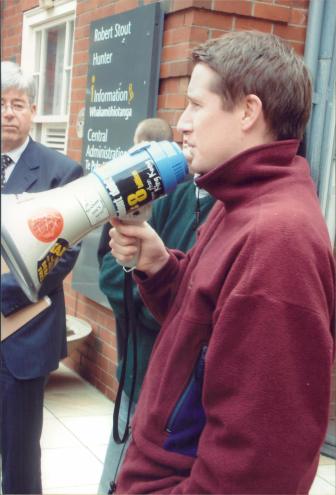 Me speaking as VUWSA President at the protest against International Student Fees. Next to me Vice Chancellor Pat Walsh

In September 2006 I launched a financial review of the students’ association. As part of this I got a motion through a general meeting (on the 2nd attempt) to increase the membership levy, and for it to be inflation adjusted from then on after. I also got in a auditing firm to do a financial review of the organisation. Thirdly I started the process of having a proper management structure within the association – something that wasn’t completed until 2009. Up till then the Student President had been the employer, the financial leader and general manager of the Students’s Association. They also had to represent 20,000 students and be the student rep on the University Council. Looking back I didn’t do too badly given I was 23. But the reality was it was too much, and the association needed proper management.

2006 wasn’t an easy year, and I had been forced to make some difficult decisions. The longstanding tension between myself and Labour and its activists continued to be an issue. This came to a head at the end of 2006 when I ran for re-election as Vic Labour ran a candidate against me, and won. I felt I had done my best, and believed what Labour did was align with the right to score a political point. Maybe they did? But the reality was I lost that election.

Losing an election hurt. And it did knock me for awhile. But in time I came to accept the result. One of the things I do look back on with pride is that after losing I kept working really hard till the end of the year. While at the time the animosity between myself my successor was fairly high, a few years later we were to become friends and of course both members of the Labour Party. Further I look back at the year that Geoff Hayward had as VUWSA President and saw he faced many difficulties of his own. Geoff also failed to win a second term at the end of 2007, and I suspect like me he grateful of when looking back later.

I loved my time on the student executive. I am proud of what I and the people I served with achieved, and what my successors continue to achieve today. The skills I learnt as a student representative have served me well in the roles that have followed. And I made a number of life long friends from across the political spectrum, including those who at the time I considered adversaries. I didn’t want to leave at the end of 2006. But it was time. And there were new challenges awaiting…

One thought on “VUWSA President – realities of leadership”