It’s generally accepted that if you are a leader of a democratic country, that you don’t interfere or openly express views about domestic matters in another democracy. You certainly don’t openly try and influence the election in another country or comment on specific candidates. 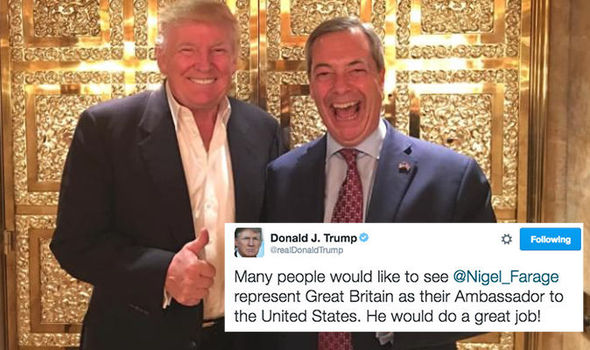 Well that was till last Thursday, when Brexit Party leader Nigel Farage interviewed US President Donald Trump on his LBC radio show. I am no fan of Donald Trumps politics, but as stated previously on this blog he is no fool. However, I think he may have misjudged the likely impact that his comments would have on the UK election.

Firstly, Trump agreed with Farage that the Brexit deal that Boris has brought back from Europe was no good, both men believing the ties between the EU and the UK would remain too strong. Further Trump said that any UK & US trade deal would be compromised by the EU withdraw agreement. In saying this, Trump has put the Conservative Party on the back foot in the election. The Conservatives go into this election needing to win public support for this latest withdrawal deal. To do otherwise would make Boris Johnson’s administration look weak and ineffective. That Trump has now publicly trashed the withdraw bill is a major spanner in the works. The Conservatives wouldn’t have expected such a blunt attack from the US President during the campaign.

Secondly, Trump suggests an electoral alliance between Farage and Boris Johnson. The basis of such an alliance would be supporting a no deal Brexit. As mentioned already in my last blog post under First Past the Post there is a risk of vote splitting if two Parties with a politics run against each other. But like the US, in UK politics electoral alliances and deals between parties are rare. Further, with doing a deal with the Brexit Party would be a bridge too far for many Conservative Party supporters. Farage was the former leader of UKIP, a strongly anti immigration and furiously anti Europe party. While the Brexit Party message is somewhat more toned down that that of UKIP, it still is considerably more rabid than that of the Conservatives. The Conservatives have rightly distanced themselves from such a pact, realising that entering into one could cost them more votes than it could potentially gain.

The Third thing Trump did that shows a total lack of self awareness, was his attacks on Labour Party leader Jeremy Corbyn. The political fortunes of Corbyn have waxed and waned over his four years as leader, and he is certainly a polarising figure. To be openly attacked by Donald Trump will do Corbyn absolutely no harm at all. Some of the largest protests held in London in the two years I’ve lived here have been during Trumps two state visits to the UK. This year thousands descended on Westminster to protest his visit, something Trump seemed to be in denial about. Many voters will a) be unhappy that Trump is trying to interfere in the UK’s domestic politics, and b) may be more likely to vote for Corbyn after Trumps attack.

So what about Mr Farage then? Nigel likes to be a maverick. For years now he has caused trouble and been a spoiler for UK establishment politicians across the spectrum. He was clearly buoyed by the Brexit Party winning the most votes in the May 2019 EU elections. He has managed for years to get considerable airtime in the British media, including a regularly LBC radio show. That he can get an exclusive interview with the US President is clearly a coup for him.

Yesterday Nigel announced that he would not be running in a constituency, instead running a national campaign to support candidates throughout the UK. Some commentators are saying he is running scared as he knows he couldn’t win a constituency. Farage has run and lost in many constituency races before (in 2010 he lost to a candidate dressed as a Dolphin). In reality Nigel has realised he has a much stronger platform campaigning nationally and allowing 600+ other candidates to do the work in constituencies.

There is criticism that the Brexit Party could split the Conservative vote and help remain parties. True. Equally there is risk for the Brexit party in being seen as close to the Conservatives. The Brexit Party are the only no deal party standing in this election. Farage no doubt calculates that as the campaign goes on, many will realise Boris’s deal is basically the same one Theresa May brought back late last year with changes to the Irish backstop. Inevitably more hardline Brexiters will oppose this, and Nigel doesn’t want his party to be tied to that. Further, the Tories have been in power for a decade and are blamed for many of the problems faced in British society today. By being tied to the Conservatives, Nigel risks being caught up in any backlash against the Tories. For Nigel to do a deal he wants it on his (and Trumps) terms or not at all.

And if remain parties win the election? If Labour gets into power there will be another referendum on whatever deal that party does – another opportunity for Farage to beat his Brexit drum, loudly. If the Lib Dems come to power they won’t even hold a referendum, saying they wish to revoke article 50 (the section in the EU treaty that allows member states to withdraw), thus giving Farage an even bigger platform about parliament ignoring the referendum result. And if the Conservatives are in opposition, they  may find themselves then having to do a deal with Farage to get back into power next election.

Nigel Farage is a tenacious and cunning operator. He is also a bottom feeder and a shit who plays on peoples fears and prejudices. To beat the politics of Trump and Farage, we need a positive alternative. Hope can triumph over fear, and love over hate. In the 2019 UK election, people are looking for positive change and for things to get better.

5 thoughts on “Farage – a thorn in the side of the Conservative Party.”