Yes, another Brexit post. If you live in the UK or follow its news you’ll almost certainly have Brexit fatigue. Trouble is it cannot be ignored. The world’s 6th largest economy leaves one of the worlds largest trading blocs – how this plays out will have global consequences.

If you live in the UK even more so. 45 years of economic integration with the EU is about to come to an end. And its likely to be on WTO terms rather than with a deal.

Last night May’s Brexit deal lost by 202 to 432 – setting a record for a government defeat in the house of commons. 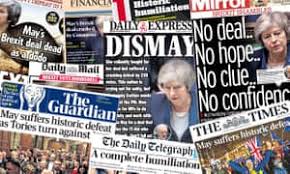 Predicting what will happen next is a) risky and b) the stuff of lazy commentators sitting on the sidelines. I’d much rather talk about what should and shouldn’t happen.

Firstly, the calls for a second referendum. I understand why those who support remain and believe leaving the EU will be economic suicide want this. But I don’t support these calls at this stage. The fact is there was a referendum in 2016. Yes there was misinformation, yes people voted without there being real plans or modelling of what would happen. However the fact is that the remain campaign lost. Polls may show that were another referendum held today remain would win, however they showed this in 2016 too. Further, if remain did win narrowly in a second referendum, those pro leaving the EU would then actively campaign for a 3rd referendum. So it would just go on.

My take is that Brexit, despite the disruption and economic upheaval it is causing, still enjoys strong support throughout the UK. Not in London, probably not in Northern Ireland (understandably with the backstop issue) and possibly still not in Scotland. The rest of the UK voted to leave in 2016, and would likely do so again in a second vote.

A General Election. I suspect the Conservatives will survive today’s confidence vote, but it wouldn’t take much for me to be wrong on this. The DUP have said they will support the government, but they could change their minds. Alternatively it would only take a dozen rouge backbench Tories to decide they’ve had enough and it would be game over.

How would a general election go? All bets are off. Polls are highly unreliable in the UK as Brexit and the 2017 general election showed. The chances of a minority government are high. Two of the last 3 UK elections have resulted in minority governments, and divisions within the country have only widened in recent months. Even if Labour or Conservative to win a majority, the open divisions in both Parties will make the prospect of stable government unlikely.

There is talk now of no Brexit. In theory  pro remain MPs who have a majority in the commons would take over the process and either call a second referendum or just withdraw article 50 and pretendng the 2016 vote never happened. I suspect the backlash of either of these moves (especially the latter) would be strong. Any move that looks like the political establishment not respecting the 2016 referendum outcome will likely see yellow vest type opposition as recently seen in France.

The likely outcome now. Brexit, no deal and WTO rules applying. In the short term this will be disruptive, and probably will cause at least a small to moderate economic downturn. Within a few months the UK will probably come to some sort of deal with the EU, as neither party want no deal long term. In 2-3 years or maybe longer the UK will start forging trading relationships with other countries and things will start to improve. But will the short term pain be worth it for the long term gain? It’ll be about a decade till we really know. It’s at that point it would be worth reviewing whether the UK was better off in or out of the EU – assuming the EU is still in its current form in 10 years.

The short term harm is Brexit will add cost to businesses who rely on imports and exports to and from Europe in a no deal scenario. For firms that were already close to the wire, a no deal Brexit could be the final straw. But this is speculation, and not a certainty. But it’s the potential risk the economy faces with a no deal Brexit.

What should happen? What needed to happen back in 2016, and certainly after the 2017 election, is a cross party agreement on negotiating a Brexit deal. Very difficult I know given the divisions in parliament over this issue, but given the serious impact Brexit will have this is what was and is needed. It is probably too late for a cross party working group to get together and negotiate with the EU before March 29. But greater unity now would help restore confidence in parliament and help get things on a better path for the next step in the process.

It’s easy to be a merchant of doom with regards to Brexit. The fact is there was a referendum and people voted to leave. The country now needs to find a path forward. This will involve pragmatism, lateral thinking, compromise and being prepared to swallow some dead rats for the greater good. This needs to start today.